In his boyhood he was a fan of SD Gundam and played a lot of games.At that time he was drawing the mecha and the monsters.Under the influence of console games such as Megami Tensei he went to a professional school for game based CG.In the department of video system he learned 3D Graphics.

As a classmate this time he met with he met with Kuroya Shinobu who later would make the circle Puffsleeve.When he played the game GARGE a port from the PC to Sega Saturn for the first time he became ineterested in Bishoujo caracters.After technical school graduation he worked for pachinko makers, responsible for the pachinko machine design and planning.After that, he was thinking that he was not becoming an adult and decided to help his father in the construction system.When he had free time he was drawing pictures.In time he found an opportunity to publish his illustrations on the web.

In 2005 along with Kuroya Shinobu he started the circle “Cradle” and began to work on doujin.The first period he issued original illustrations for doujinshi and at point the game 『東方Project』(East Project) attracted attention.He also illustarted the sequel of East Project.

At this point Kuroya creates his own circle.By e-mail from Enterbrain, in the magazine 『マジキュー』 “Magic-Cu” he received his first commercial work.And later, regardless of genre, he has been very active as an illustrator.

There may be mistakes in the translation 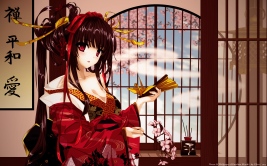 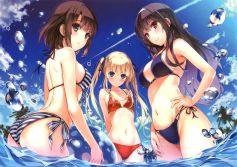